I like to think that I will be trying my best to make a ‘lately’ post at least once every 1-2 months, depending on my life obligations. But keeping a log of my recent doings has been on my list of things I want to do. Such as listening to music and working with new software…life, in general. Maybe I might even talk a little about working with new chemicals in the lab. At any rate, I will attempt to log. These posts will not be very well prepared, just jots.

I have been going to concerts since I was in elementary school. One of my early concerts was R.E.M. at The Palace of Auburn Hills near Detroit when they were on their Monster tour. I have been a loving fan of R.E.M. since I can remember. That concert is one of the most memorable times of my life. 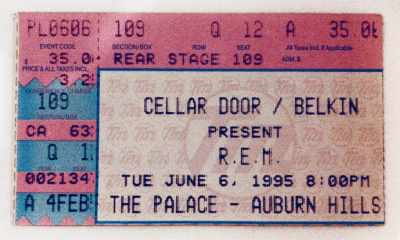 During my long bike tours, lately, I have found myself revisiting them — along with Aaron Dessner (The National) and Justin Vernon (Bon Iver) — both of which are also obsessions of mine, but recently they have all joined and made my most current über obsession.

I have always longed for Michael Stipe’s voice. It has always provided comfort for me. Now with Big Red Machine in force, I am above the clouds (that is supposed to be a good thing). I’m listening to them now as I write this.

I have been working with my old domain https://etreacy.me for several years now and decided to change to .com. I have also changed my hosting and overhauled my entire site to run in A.W.S. I am currently using A.W.S. Cloud9 for editing, S3 for storage/hosting, and Route 53 domain registry, and CloudFront for C.D.N. Whereas before, .me was working with GitHub and Netlify’s DNS/CDN network with DreamHost domain registry. I was driven to make my site more efficient and hosted ‘green’, whatever that may mean these days. But for me, I host my website in Amazon’s A.W.S. Central server (Montreal, Canada), which the energy to run is used with ‘sustainable/renewable’ energy via hydroelectric dams. Also, I wanted my site to run at no data-cost (or at least very little) to the viewer. Both domains still exist, and I plan to make the .me domain forward to .com, because according to Apex Ping, this switch yields a mean response time of 60 ms, which as before it was ~140 ms. That generates a 40% improvement response time, switching from Netlify to CloudFront.

I’m still working on optimizing my images, though. That can take some time—more about optimizing this site later.